Reflections on the National Summit

Posted on June 1, 2014 by cprsnorthernlights

Now that we’ve all had some time to get home from last week’s CPRS National Summit 2014 in beautiful Banff and settle back into “reality,” I wanted to offer my reflections on the conference and what it means to be the new President of the best little chapter that everyone knows (and loves), Northern Lights.

The gorgeous setting for our conference, the Fairmont Banff Springs.

This was my third national conference and they keep getting better. The sessions and opportunities to learn are always good of course, but the conference is so much more than that. It occurs to me now that the greatest value in these conferences is the networking, as cliche as that may sound (and I don’t just mean the socializing, of which there was a little, I’ll admit). Our now past national president, Richard Truscott, put it nicely when he referred to the conference as his chance to see his “once a year friends.” I’ll go a step further to call some of these people my “once a year best friends” or even “once a year family” (but maybe that’s the millennial in me; we’ll let Jeremy Berry decide that).

I was really struck this year by how open, sincere and willing to converse everybody was. Perhaps this was partly due to the fact that I was actively trying to get out of my shell a bit more than comfortably normal for this introvert and meet people on behalf of my chapter, but I had so many amazing conversations.

Your VP (Jonathon Dyck) and I (along with our Secretary/Treasurer Renee McCloskey as National VP) attended the President’s Council to get things going. It was really great to be involved in these conversations and hear what sort of challenges other chapters are experiencing across the country. Turns out, a lot of them are the same. I also realized (and all due respect to our fellow chapters) that a lot of the challenges others face, aren’t even issues to us. I believe that’s a testament to how passionate and dedicated we are, in a variety of ways. Regardless, it was great to open up some lines of communication with other chapters, particularly the other two BC chapters, who we intend to collaborate with a great deal more over the coming year as we work on our live streaming and regional engagement strategies.

During the President’s Council, we were each asked to contribute what our greatest goal for the coming year is, and I’d like to tell you that mine is what I mentioned above: a regional engagement strategy. I recognize that our membership has grown quite a bit over the last year, primarily in areas outside of Prince George, and because of this, it is imperative that we now step it up and make sure we’re offering value to all of our members equally. Our new executive committee will be meeting for the first time soon and I’ll be sure to update you on some of the ways in which we intend to do that. (I also invite you to drop me a line and let me know what your ideas are too!)

Back to the conference, we made quite a name for ourselves. After the opening ceremonies, where we celebrated our member and communications co-chair Shelly Burich receiving her APR with giant signs (congrats again Shell!), everyone knew who Northern Lights was. Even Scott Stratten was quite taken by us and recognized us as he delivered his keynote. Following that, everyone I met just seemed to know who we were, and that was such a great feeling! 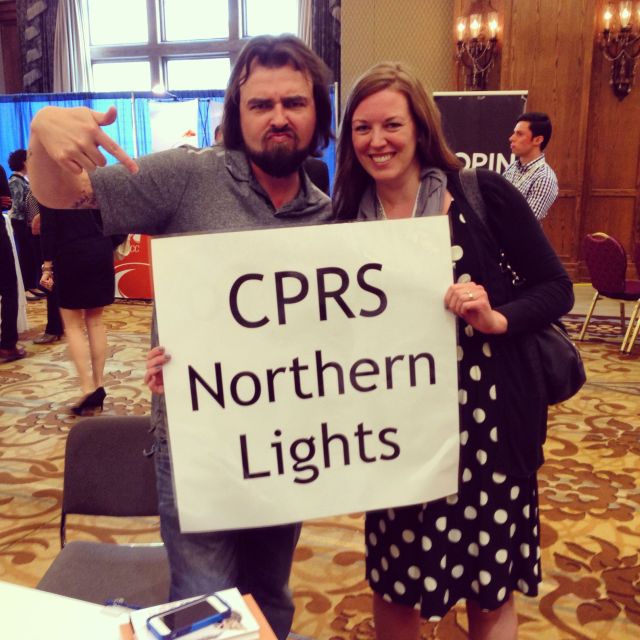 Of course the biggest highlight of the conference was the awards gala, where our chapter was awarded with the Lectern Award and the CN – Emery Leblanc Award (under 75). I was honoured to go across the stage and receive these for my chapter. Of course the rest of us in attendance had our signs out then too! ;) Some people know our chapter as the “rowdy” ones (and a variety of other adjectives, I’m sure), so I feel like winning awards like this makes a great statement that although we might play hard, we work hard too.

I’ve been involved in CPRS for about 5 years now and I couldn’t be more proud of us! I’ve seen some great advancement, and I’m so excited for this next year as President to be able to  move us even further ahead. I know that part of our charm is our small size, but I’m confident that we can continue to grow and extend into other regions, all the while maintaining our close-knit, respectful, passionate culture that everyone knows us for.

This entry was posted in National Conference. Bookmark the permalink.

8 Responses to Reflections on the National Summit